William and his Talker

About this time last year we started teaching William to use a technology device for communication or as we call it, a talker. We started with one we had on loan through our Speech Therapist. William, being a little techie, took to it fairly quickly.

For awhile, he just explored. Pressing every button and memorizing. He quickly figured out ways to say things that were never modeled in a therapy session. William began saying "Mr. Potato Head" "Stuffed Toy" neither of which are his favorite toys. We thought he was just exploring the buttons and sounds until one day his nurse figured it out, William wanted to watch Toy Story! (Mr. Potato Head is a Toy Story character) William's face lit up when our nurse figured it out. We then told him he had to finish therapy first. Frustrated with all of us he put his head down on his tray. On a different day we hired William's nurse's daughter to babysit Juliet so we could go out. The kids loved having a teenager in the house. William used his talker to say "Check Her Out". This was amazing because the "Check Her Out" button is very hard to find and we had never heard him use that button before.

William was evaluated last spring on his abilities and by the end of the summer we secured a new talker. We ordered the NovaChat7.  When the device arrived, it was way over my head and frustrating for William.  I ended up scheduling a couple of training sessions for myself to learn how to program it. One of the first things I did to get William interested in using his new device is create a Toy Story page. William could now say "I Want" + "To Play" + "Toy Story" It worked and William was again engaged with learning his talker. I added a page with all his favorite books and even a sports page.  (See video below of William leading an I-L-L....I-N-I chant.) 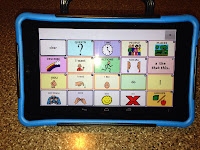 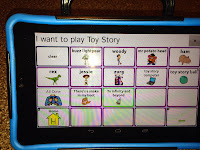 One week before Christmas, in full two year old behavior, he pushed the talker off his tray. William said "All Done" "I Want" "To Watch" "Toy Story". He said this phrase twice and became frustrated when I did not respond so he pushed it off onto the floor. Thankfully it was fixable and covered under warranty. So a week before Christmas we put the talker in the mail for repair.

Dan and I discussed what to do and decided that we needed to punish William because we could not have William throwing the talker and ipad on the floor when he does not get his way. We decided that a fitting punishment was to not allow him to watch Toy Story for one week. We had to explain to all of his therapists and nurses where the talker was and make sure the nurses knew that he was not allowed to watch Toy Story. Each time we told the story William would put his head down or shake his head no, as to not to talk about it. Poor Kid.

I wish we could say we got the talker back and everything is working great. But unfortunately when we got it back it was still having problems. So it has been sent back for more repairs. :-( 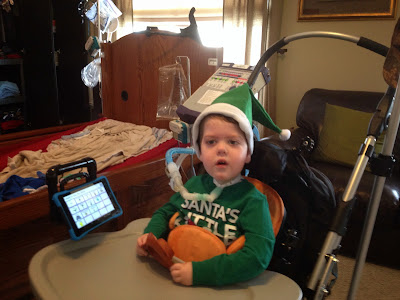 (Dan built a stand to free up space on William's wheelchair tray and to force the nurses to keep the talker near William at all times.  We were going to purchase a stand, but the company was charging $500.  This angered Dan so he went to the hardware store and made one for $20.  He is currently making another one for Will's other tray.)

Posted by Melanie Whiston at 7:31 PM