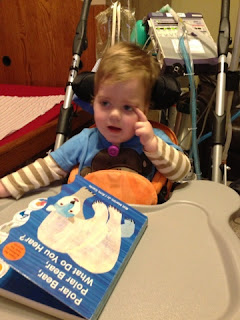 Polar Bear Polar Bear was a gift from his Grandma. She found a version with buttons to push with all the animal noises. Like any new toy it had to be studied by William. (The picture to the left shows William's pensive look or the "thinking pose" with one finger by his eye.) However after a few reads, it became a big hit. He plays with his book with so much energy and determination, turning the pages quickly to get back and forth to his favorite animals and then pushing the animal sound buttons. So far his two favorite animals and sounds are the Lion and his roar and the Leopard and his snarl.

In the below video, William shows me his two favorite animals! I  was going to asked him to show me the hippo or zebra next, but in good sibling fashion it was taken away by Juliet! She likes reading the book with us too. Her favorite is the whistling zoo keeper.

Posted by Melanie Whiston at 3:58 PM