Twelve days in the PICU, an ER visit and a new pulmonologist.

Lots to talk about.

First, William was stricken with a respiratory infection. The infection can be life threatening due to his weakness and inability to cough up all of the mucous. His cold stayed in the bronchial tubes and did not enter the lungs. We were kept in the hospital for twelve days because the physicians wanted respiratory therapists to perform the deep suctioning.  We received training and are now equipped to perform deep suctioning at home.

As a result of the hospital stay we have a ton of new equipment in our house.  We have a pulseoximeter to continually measure Will's oxygen levels.  We have an oxygen machine that gives William a minimal amount of air throughout the night through a nasal cannula. Currently, William does not need the cannula during the day.  We also secured a cough assist machine that forces air into the lungs and then sucks out the air to mimic a cough.

After returning home from the hospital stay, William was improving until we noticed that one pupil was dilated and not as reactive as the other pupil.  We rushed to the ER where CT scan was performed and found to be normal.  We reached out to other families with MTM children and learned that silent seizures are common. (Special thanks to Scott F. for the emails).  An EEG was performed and was found to be normal.  After nearly 14 hours, Will's pupil returned to normal.  It appears that the cause may have been a new medication.

We were released from the Central DuPage Hospital on Monday afternoon and immediately drove to Comer Hospital to meet with a pulmonologist.  We were still searching for this important piece of our team as we had not yet found a pulmonologist that was willing / capable of handling a challenging patient like William.  After a long meeting and examination we were happy with Dr. Lester and her staff.  So it appears that we now have our team of physicians in place.  (A special thanks to Dr. Rimas Lukas for all his help in assembling the team).

Finally,  we had an extended conference with Paul and Alison Frase concerning the treatment research that is taking place in America and in Europe.  As of today there are no treatments at all for MTM.  The future looks promising as there are several pre-clinical trials (trials not in humans) taking place.  We remain hopeful that clinical trials (trials in humans) will begin in the next couple of years.

The next step for us will be raising funds to promote the research for treatments.  By all accounts, they are very close to developing a treatment. 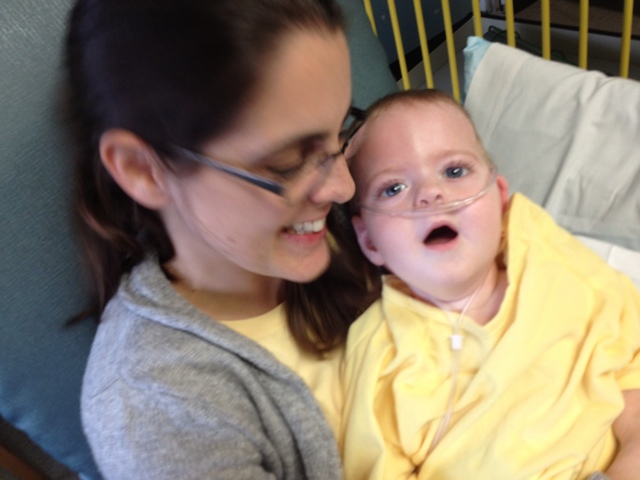