William has been in Preschool for a little over a month now. He attends school four days a week from 9:00 AM to 11:30 AM. School has been a bit of an adjustment for us all.  In order to get William to school by 9:00 AM we start his breathing treatment at approximately 6:00 AM. Those of you that know William best, know that William is NOT a morning person.

On top of the schedule change, William caught a miserable cold at the beginning of September.  He missed several days of school. We were doing breathing treatments (Nebs, Vest and Cough Assist) every four hours and had multiple trips to see the doctor.  This went on for the majority of September.  On the days he was doing well we sent him to school and on the not so good days he stayed home.  (After such a long time not feeling well, we practically had to wean him off of his ipad.)

In spite of having a sick start, William is doing well in school.  He often comes home smiling and has been vocalizing more than ever. I have received reports that he enjoys the circle time where they talk about the day, month and the weather.  He joins his class at snack time, where he licks a sucker. I got a report from one of his nurses that he had a conversation about Batman with another little boy using a Batman page I had programmed in his talker (communication device). The class has had the sharing bag that allows one student per week to bring in a toy. He brought in Buzz Lightyear to share with his class. (See picture below.) The socializing he is getting in these situations is huge for his social development.

I also included a picture of William in PT/OT. The picture below shows him swinging while kicking a ball. 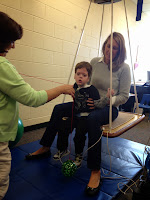 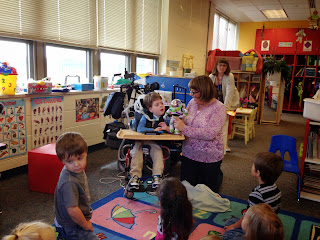 Below are some pictures that Dan took of William waiting for the school bus and getting on the bus, along with one of myself and Buzz. Buzz loves helping me take Juliet to school and waiting for William's bus.  He is often too excited and needs more training. 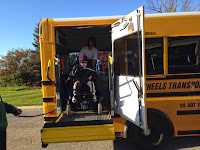 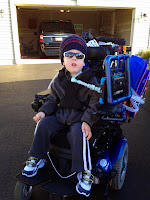 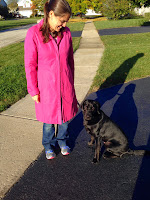 Here are a couple of fun pictures I took of William and Juliet playing on a Saturday afternoon. 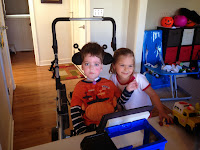 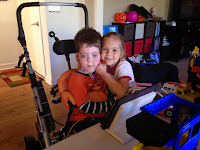 Posted by Melanie Whiston at 4:58 PM