Our 4th of July Holiday Weekend was filled with fun adventures! Here are some fun pictures and stories from the weekend.

Thursday, July 4th 2013:
We started our holiday weekend at a family 4th of July party at Uncle Den's and Aunt Gerry's House! It was wonderful to be able to take William to a family party! 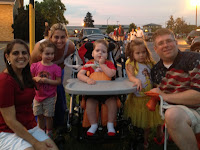 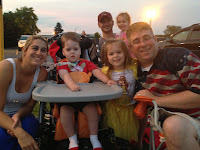 All of us went to Batavia's firework spectacular. It was perfect. They had convenient handicap parking that allowed us to get a nice view. We were able to park our van in a church parking lot close to where everyone was set up with blankets. William sat in my lap during the fireworks and acted as if I was his human lounge chair leaning all the way back for optimum fireworks watching. He enjoyed the fireworks. He only covered his eyes a couple of times. He was not a fan of the ones that fizzle downward and the super bright ones.


Friday, July 5th 2013:
On Friday we took the kids to see Monsters University. William watched the movie for a few minutes and decided he did not like it and shook his head no, started crying then fell asleep.

Saturday, July 6th 2013:
On Saturday we celebrated William's 2nd birthday! William's actual birthday is on the 18th, however since Rachel and her family were in town we decided to have an early birthday party!   The theme was Toy Story!

William has been into Toy Story lately. In fact he has figured out how to ask for Toy Story with his talker. We have not spent time programming the one we are currently learning on since it is a loaner and we are getting a new one soon. So of course there is not a button for "Toy Story" but there is a "Mr. Potato Head" and "Stuffed Toy". He has taught himself to push these two buttons to ask for his movie.

William had a great time at his birthday party. I think William's favorite present was his very own Buzz Lightyear!

Later that evening, we got a visit from the Cooke Family!! It was great to see Nick, Mavis and the kids!! We even got Ava and Apolo to pose with Mr. Lightyear.

To Infinity and Beyond! 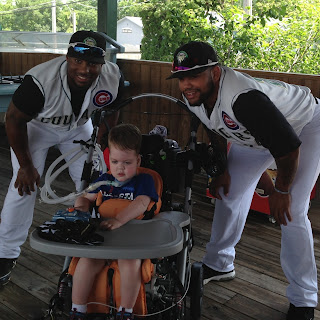 Sunday was the Where There's A Will There's A Cure's Bash at the Ballpark Event at the Kane County Cougars Minor League Stadium (a class A-Affiliate of the Chicago Cubs). We reserved the outfield party deck for our friends, family and supporters.

The Cougars were awesome to work with. They really made sure William and our guests had a good time.

All the kids were supplied with kid zone passes. The kid zone was located directly behind the party deck and contained face painters and bounce houses! Below are pictures featuring Brooklyn and Juliet with their face painted like pirates. William got a small baseball temporary tattoo. As you can tell from the photo with Brooklyn he is not a fan of face painting. In fact we had him sitting near the face painter where he could watch Uncle PJ play basketball and he got upset. I think he thought he was in line for face painting.

Ozzie the Kane County Cougar's Mascot even stopped by to meet everyone! 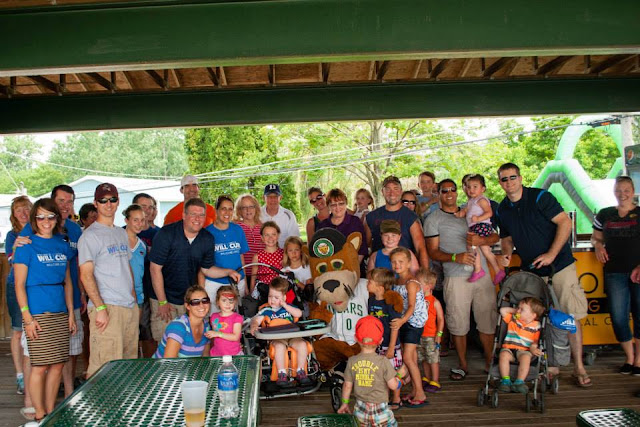 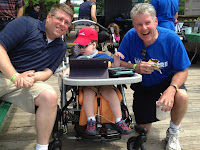 The Bash at the Ballpark turned out to be a great day with family and friends! Thank you to everyone who joined us at the game! (click here to see more from the day.)

At the end of our four days of fun pack adventures with the kids William began vocalizing! We brought him home from the game because he was getting hot and falling asleep in his chair. Once home he was wide awake and vocalized for 45 minutes (see video below)!! William hardly ever vocalizes or communicates with sounds so this moment was very exciting!

Posted by Melanie Whiston at 8:24 AM

Email ThisBlogThis!Share to TwitterShare to FacebookShare to Pinterest
Labels: i