I am excited to report how wonderful William has been doing lately in so many aspects of his development!

The most fun is his little personality. Here is the latest fun story - The other day we were all sitting at the kitchen table working on Christmas Cards. William was sitting in his chair playing with one of those cars with a steering wheel with a horn that says "beep beep - out of the way". (Yes, probably not the best phrase to teach a child that will be graduating to a power chair in the next couple of years.) At one point I look over and William had his head laying down on the steering wheel. I run over and say "William did you loose your head? (This is the phrase I use when he is tired and looses his head control) Are you tired? Do you want to go lay down?" Right before I get to him he pushes up his head using his little arms against his tray and looks up laughing. The laughing was silent, but it was the biggest grin I think I have ever seen on him. At that point we all realized that William played a game on me and everyone laughed. William looked around the room at us with the biggest smile.  He continued to play this game until he wore himself out.

We are also seeing a gains in breathing strength while off the vent, tolerance to the passy muir valve (PMV), gross motor and fine motor!! For those that are not familiar with the passy muir valve, it is a one way valve that when place on the the trach allows air through the vocal cords and helps with speaking. William is wearing his purple PMV in the this video of him and in the pictures below. I am so proud of my little man in this video! He is sitting up, off the vent with his PMV, no suctioning requirements and playing!

William has gained strength so that we can hear his little voice sometimes during a cry. Not that I want him to ever be sad and cry, but I do like to hear his voice again. This also goes back to his little personality showing. He now will cry to get my attention, when it is time for bed, or when the iPad is taken away. Most often he brakes out the fake tears when I leave. Yes, my little man has actually cried when I just walked to the kitchen. Sweet boy, how can I not run back to him to hang out more. This is why I am behind on almost everything! And yes, he has been known/reported to "convince" his night nurses to let him play with his iPad longer before bed.

As far as his fine motor, I think I will have to give credit to the iPad. He now uses either two or one fingers to navigate an app! His occupational therapist (OT) noted this improvement in his latest evaluation. His OT and DT (developmental therapist) have both reported how mechanical he his. How he studies something that he is interested in until he figures out how it works (our little engineer). The key phrase is "that he is interested in". If he is not interested, he will push or toss the item off of his tray (again personality). We have created an "all done" basket that he can he can put his toys in instead of winging them to the floor.

Raising William has been full of serious medical challenges. But he is amazing, even with all of his challenges he continues to be happy, sweet and now funny. It is incredibly rewarding to see him doing so well and making gains in so many areas! 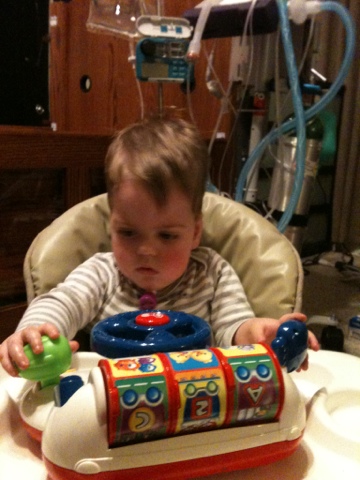 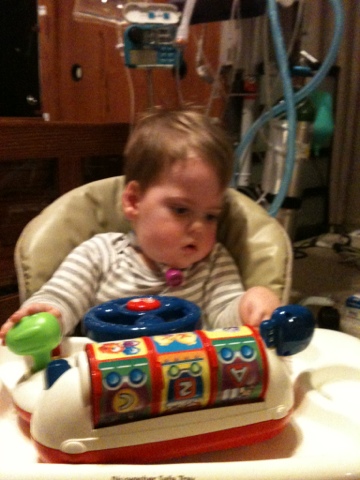 Posted by Melanie Whiston at 8:13 PM